Find a copy of "Gothic" on DVD

Directed by cult favourite and "enfant terrible" Ken Russell, Gothic delves into the erotic and terrifying night in 1816 that ultimately gave birth to Mary Shelley's classic horror novel Frankenstein and Polidori's "The Vampire".
While a wild storm rages in the sky over poet Lord Byron's literary house party on the shores of Lake Geneva, the exiled English poet suggests everyone invent a ghost story. As the dead of night closes in, he and his guests go on to hold a séance to conjure up their deepest, most secret fears. But is it their intense lusts and vivid imaginations at work, or have they truly created a monster?

Watch the Film '86 Location Report from the set of Gothic - including interviews with the director and stars: 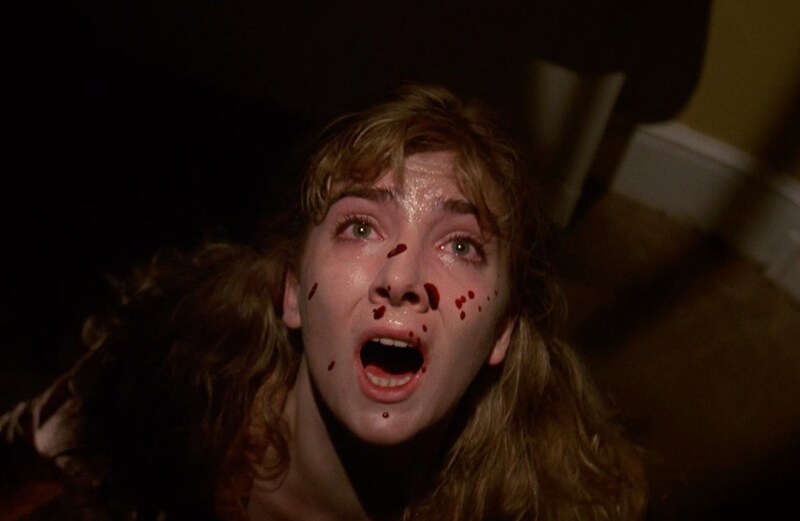 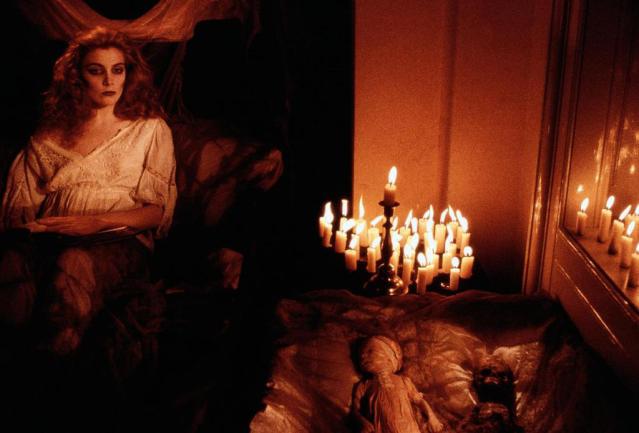 "I loved that film when I finally got over my fear of the VHS cover. Thanks for the nightmares!"  Jemaine Clement (co-creator, What We Do In The Shadows)

"Lock up the kids and blindfold your granny; Ken Russell is at it again"  Peter Travers, People

"One hell of a trip"  Bruce Williamson, Playboy

"A journey through a highly sexual garden of horrors"  Daily Telegraph

"It's bound to upset somebody"  Barry Norman, Film '86

"Filmmaker Ken Russell dramatized that dark and stormy Geneva night, and the dark and stormy nature of Byron's personality, in his 1986 film Gothic, a film that revels in the dark, sinister and macabre aspects of Byron's sexuality. Natasha Richardson played a once-again too beautiful Mary Shelley alongside Gabriel Byrne's vampiric and sexually threatening Byron. Over the course of the strange night - a night haunted by the demons of opium, lust and unbridled imagination - Byron and his guests conjure up dark forces that threaten their very sanity. Their imagination, in the words of Julian Sands as Percy Shelley, gave life to 'a creature, a creation, a jigsaw of all our worst fears in flesh and blood.' The creature of the night, taking varied forms and shapes for each member of the party, is at its heart Byron himself, his seductive allure claiming not only Mary's stepsister Claire but Percy and Polidori as well."  Dr Gregory L. Reece, Creatures of the Night

"Gothic alludes not only to pederasty but also abortion, adultery, blasphemy, incest, self-mutilation, vampirism, and at least one attempted murder. It also includes a man-to-man kiss - tongue and all - between the immortal poets Lord George Gordon Byron and Percy Bysshe Shelley!"  Joseph Lanza (Phallic Frenzy: Ken Russell and His Films)

"Surely it is time Russell stopped producing this sick rubbish..." Letter to The People, March 1987

"A complex psychosexual drama about the act of creating art" James Payne, Garageland

"(A) seminal Russellian film which deal(s) with belief, sex and identity"  Dangerous Minds

"Russell means Gothic to be the last horror show. Byron is Count Dracula, feeding on his guests' dreams and demons. Shelley is every weak hero, Polidori every mad doctor, (Claire) Clairmont every wench whose lust turns her into a succubus. And (Mary) Godwin, racked by visions of her stillborn child, becomes the cursed mothers of The Exorcist and Rosemary's Baby"  Richard Corliss, Time

"Lurid, kitschy, over the top... Russell isn't afraid to be trashy in the pursuit of unfettered cinematic symbolism. It's a dirty job, but somebody's got to do it"  The Grindhouse Project

"Make no mistake, Gothic very much is a horror film. it has all the trappings its title suggests. it has a monster of the characters' own making (the genesis for Frankenstein's monster) - and it has a nightmarish feel few films have ever equalled"  Ken Hanke, Mountain Xpress

"Russell's poets romp through mud, slime and nightmare fantasies whilst dressed in the height of Romantic fashion. As a sleazy, sexually repressed Polidori, Timothy Spall seems so revoltingly convincing it makes you concerned for his family"  Desson Howe, Washington Post

"The cast is as spastic and apparently lobotomized as you might expect if you've read the above plot synopsis. Gorgeous Natasha Richardson, in her film debut, carries the film with grace and confidence, making for a good counterpoint to all the craziness"  Fright.com

"An exaggerated, plotless experiment in dramatic and visual overkill, and we clearly recognize every minute of its running time as the manipulation of an overambitious director who seems to go a little madder with every film he gives us"  Film As Art

"At certain points the story is historically accurate. Then, of course, the camera zooms in on a fish on a bird bath or Byron's incredibly creepy collection of life-sized mechanical dolls and you have no idea what the hell is going on"  Gillray's Printshop of Historical Absurdities

"As fans of Russell know, there's a sense of delight one gets from his completely-uncalled-for extremism. Gothic is probably my favourity entry from an incredibly bizarre career"  Sara Century, Fangrrls

"As ghoulishly funny and frenzied as a carnival ride through The Marquis de Sade's Tunnel of Love" Vincent Canby, New York Times

That New York Times review in full
​
"You will cleave to this tortured bit of cinematic epilepsy because it is ALIVE... I came away from Gothic with my soul on fire... (...) because it is dangerously conceived, impudently mounted, uncaring of its footing, determined to crawl the wall or tumble into the abyss, all in the name of disgorging the absurd demon in thought."  Harlan Ellison in Harlan Ellison's Watching 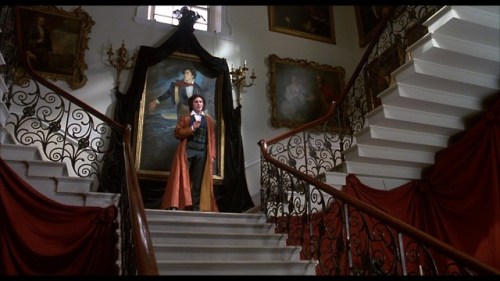 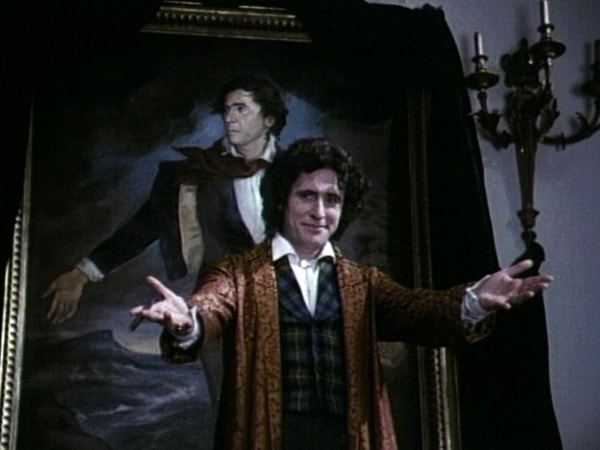 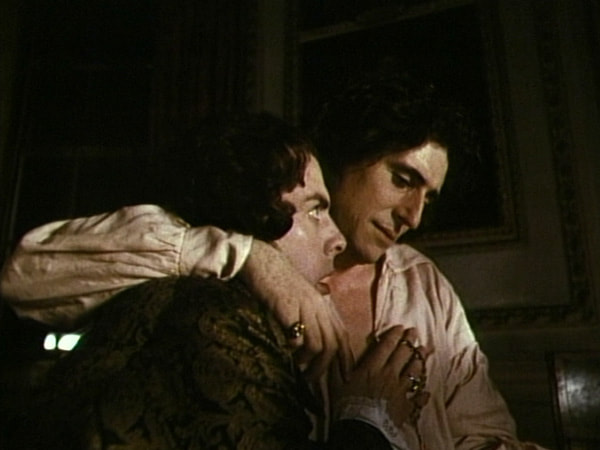 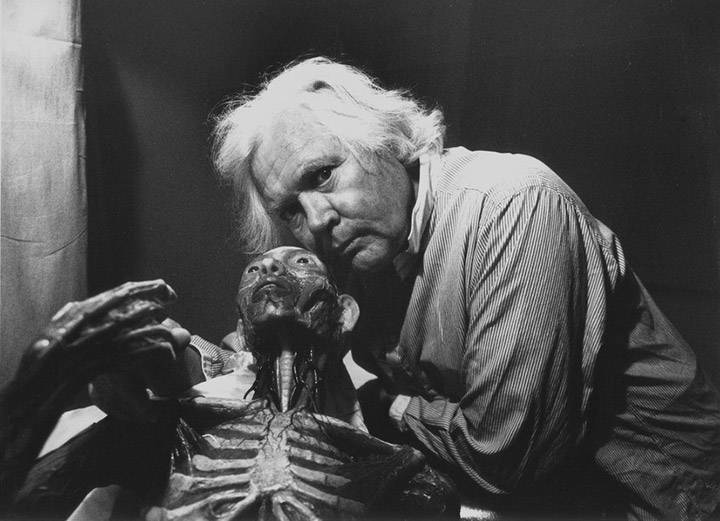 "Gothic is a real cult gem due a critical reappraisal and ripe for rediscovery by fans of horror and Russell's work.  (It) is inspired, of course absolutely mad, and sometimes even downright brilliant"  Martyn Contario, Scream Magazine (2012)
"(Russell) was a demiurge intoxicated with the idea that more equals much more, and that subtlety was for the half-alive"  Michael Atkinson, Sight & Sound
​
Read the review by Ken Hanke at Mountain Xpress.com

Read the Nights at Diodati review of Gothic at Shadowplay

Read "The Torture in Store: Ken Russell's Gothic" by She Blogged By Night

"My favourite of the various attempts to capture the events at the Villa Diodati. Full of barely conatined passion and gothic visual excess"  Dr Xavier Aldana Reyes, founder member of the Manchester Centre for Gothic Studies, author of Gothic Cinema, 2020 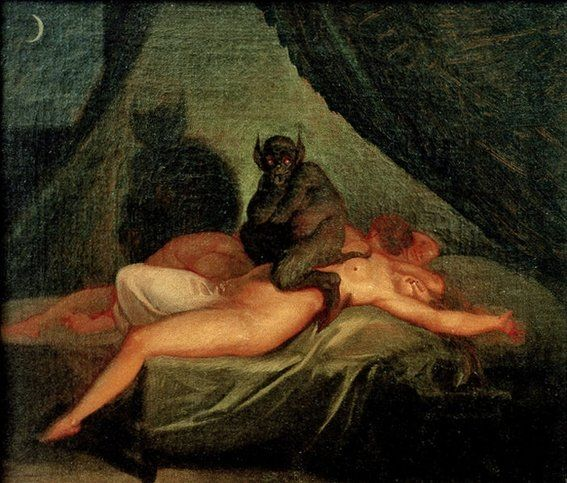 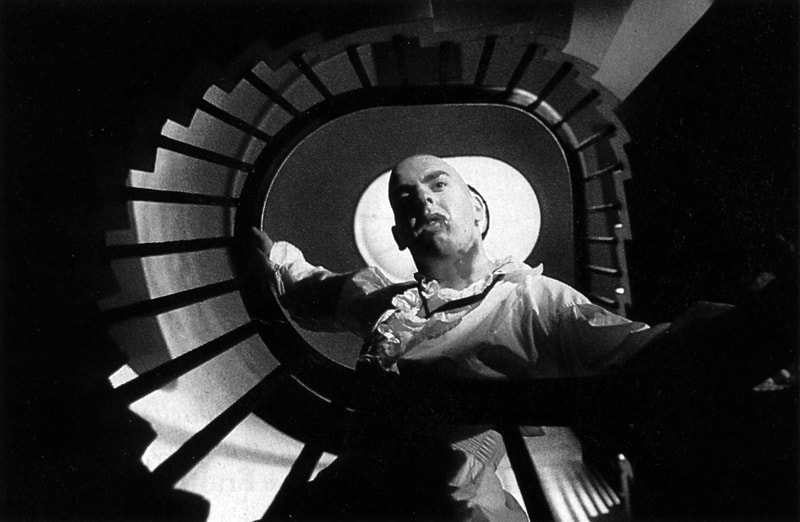 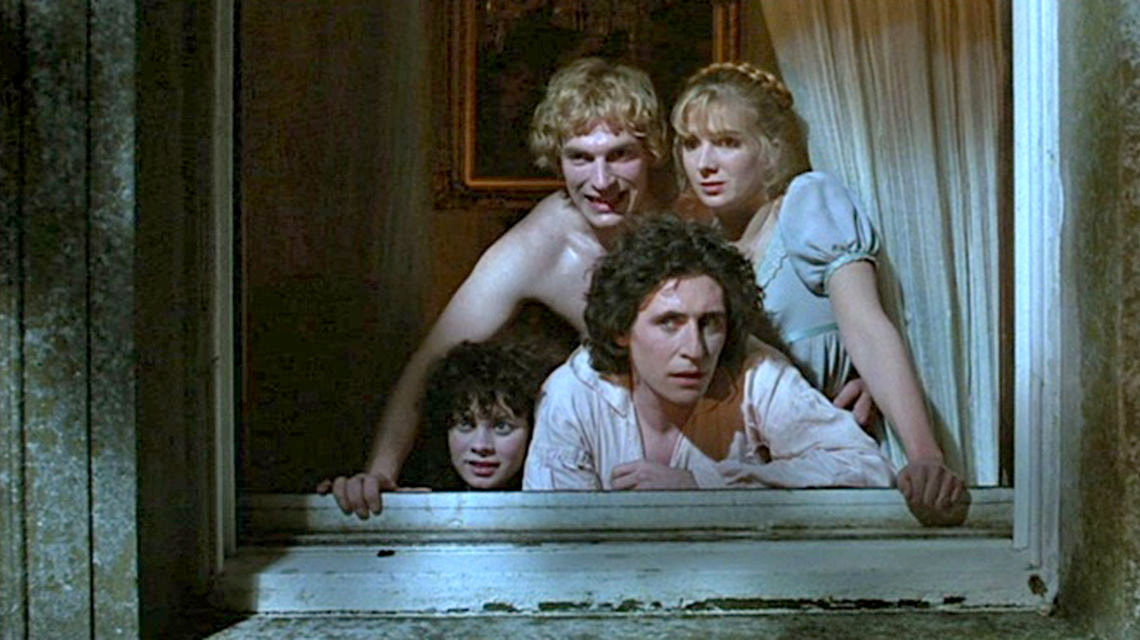 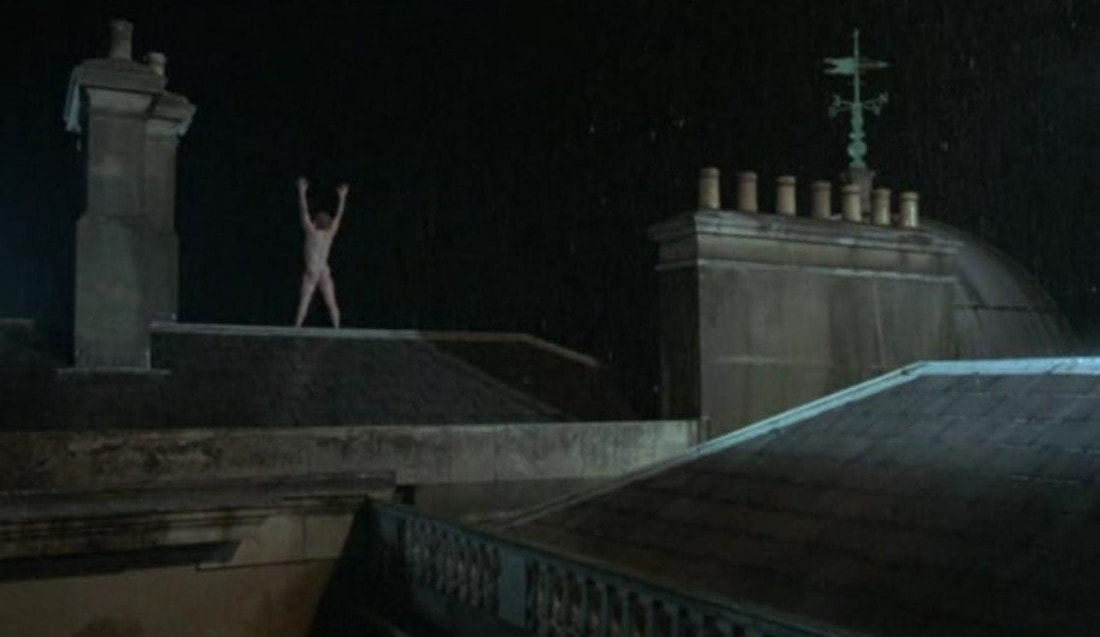 Buy the soundtrack by Thomas Dolby

Watch the excellent fan video of the single "The Devil is an Englishman" (written by Thomas Dolby and Stephen Volk). Also a fan edit to "Somebody's Watching Me" and another edit to new music "Like Hell: A Gothic NIghtmare" by Corvo: 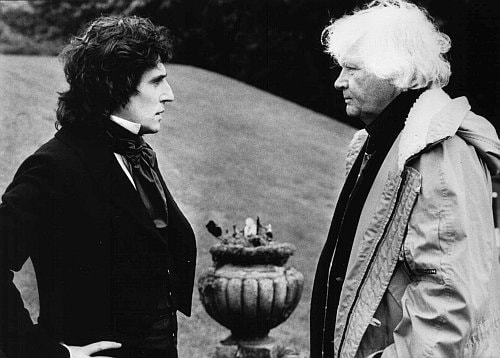 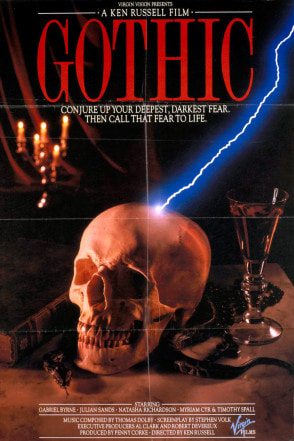 Click here to explore more about Frankenstein in culture and media on Frankensteinia: The Frankenstein Blog.
Look for more films directed by Ken Russell
​Read an interview with Ken Russell "The Last Fires of Film's Old Devil" (from The Guardian 29 April 2011) on the occasion of an upcoming screening of his uncensored version of his "masterpiece" The Devils.

Read Legendary Film Director Ken Russell has Died on Dangerous Minds (including film clips of The Music Lovers, The Devils, Tommy and Valentino) (November 2011).
​
Read Leslie Felperin of Variety on the death of Ken Russell: Brit cinema's enfant terrible distinguished by raw, passionate filmmaking.  "There was still energy, flair and a very English eccentricity to be admired in those (of his films) that were critically reviled at the time, like Gothic" (Dec 2011) 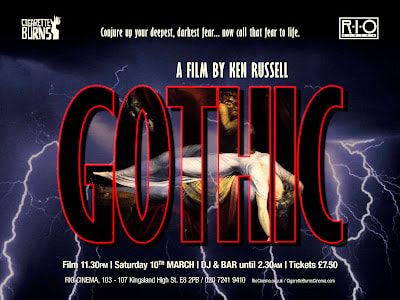 A article by Stephen Volk on the Villa Diodati group and the genesis of Gothic appears in the BFI compendium Gothic: The Dark Heart of Film edited by James Bell (BFI publications, 2013) and released to coincide with their major "Gothic" season of screenings.
A wonderful piece of artwork called "Mary Shelley Phones Byron" by Oscar Grillo: 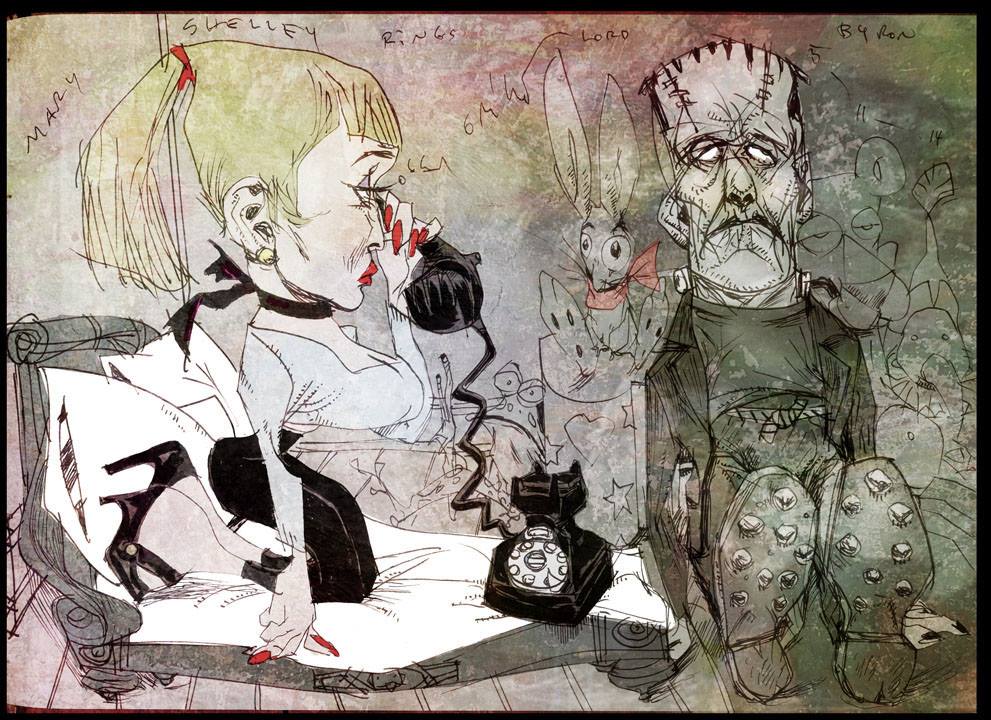 Read Taste of Cinema's "10 Ken Russell Movies That Will Change The Way You Think" - which includes an unusual assessment of Gothic!

"What if Byron and Shelley Had Tweeted from the Villa Diodati?" - an article in The Spectator (Sep 2013)

"Happy Birthday, Horror!" by Neil Snowdon - celebrating the events at Villa Diodati two hundred years after they happened, with a 30th Anniversary screening of Gothic in Newcastle on 17 June 2016.

A Gothic Gathering at Lake Geneva (clips of BBC TV documentary "Frankenstein and The Vampyre: A Dark and Stormy Night" focusing on the scientific and literary influences on the Villa Diodati ghost story session that resulted in Mary Shelley's Frankenstein and Polidori's The Vampyre. Featuring interviewee Stephen Volk)

Frankenstein: from literature to myth to bogey-man of science (Science Museum) by Sir Christopher Frayling 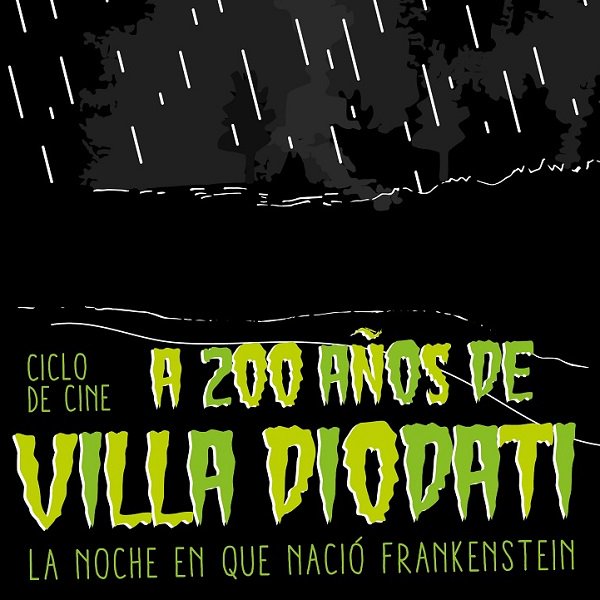 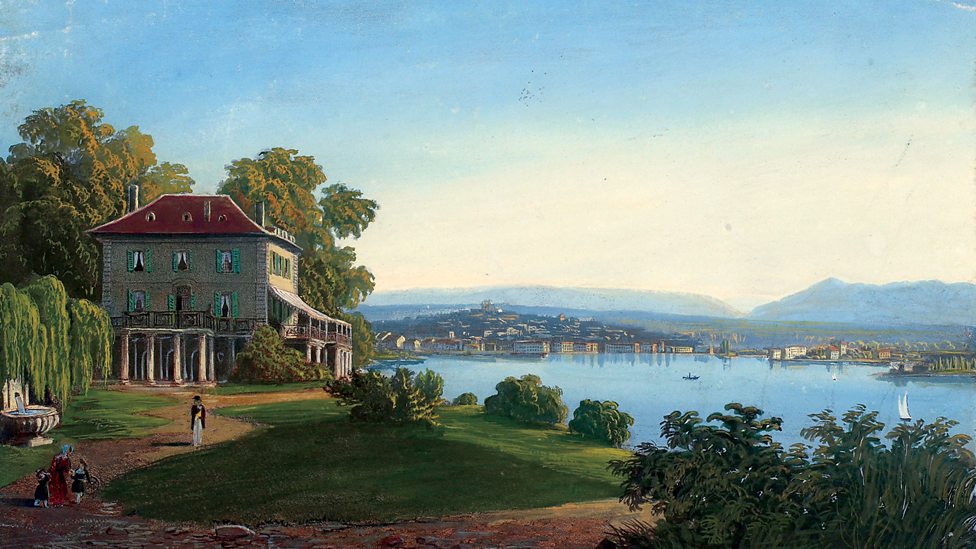 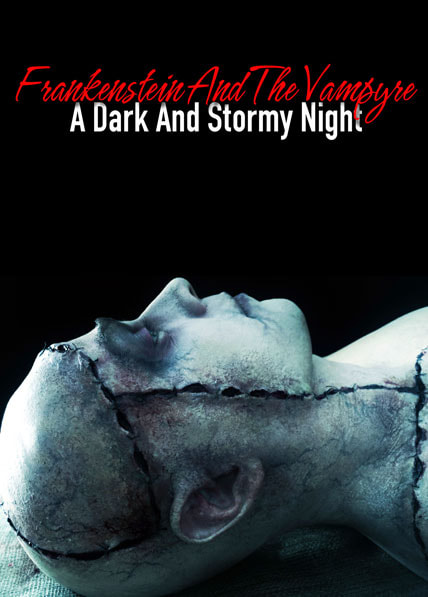 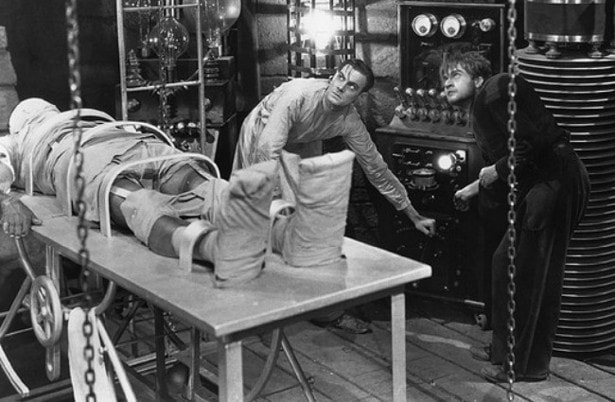 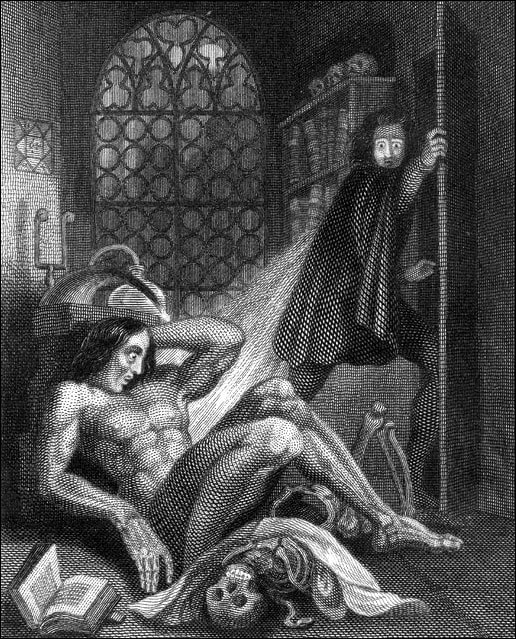 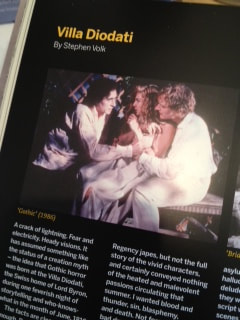 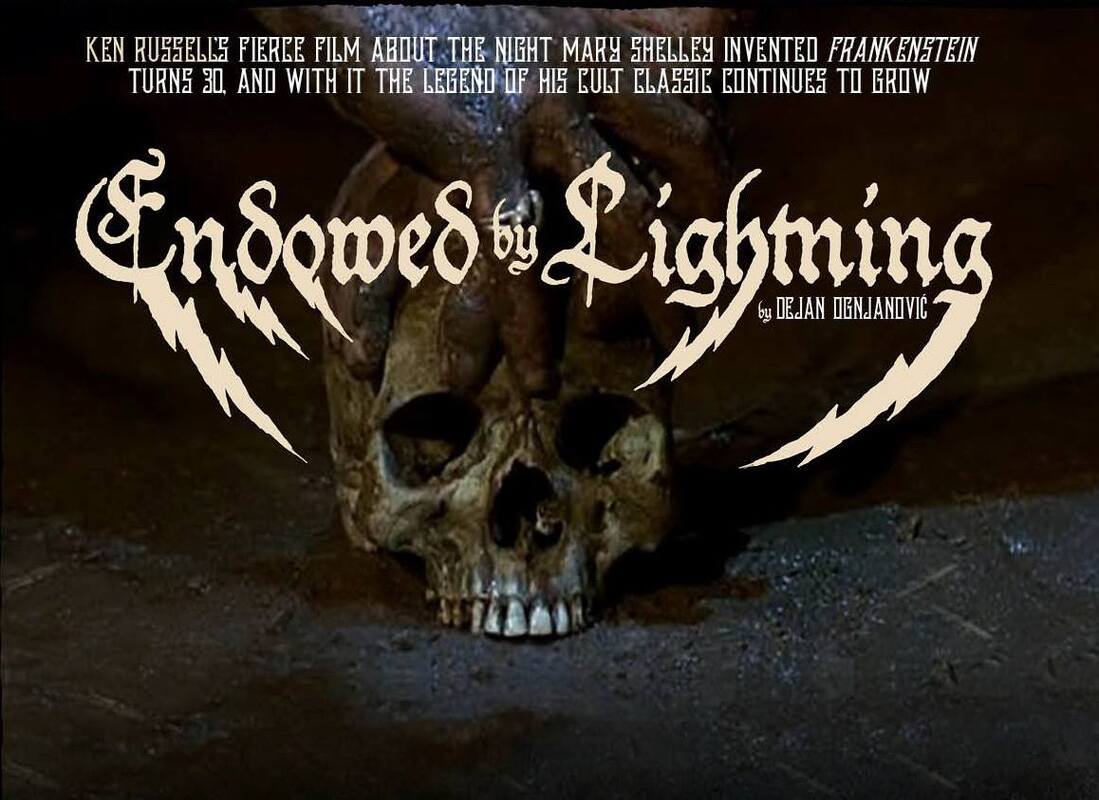 Watch the excusive interview with Stephen Volk about the writing of Gothic: discussion with Matt Melia as part of KEN RUSSELL DAY 26.05.1018 at Deptford Cinema

Read the review "Five Go Mad At The Villa Diodati" by Andrew Weltch at wordsworth.org.uk 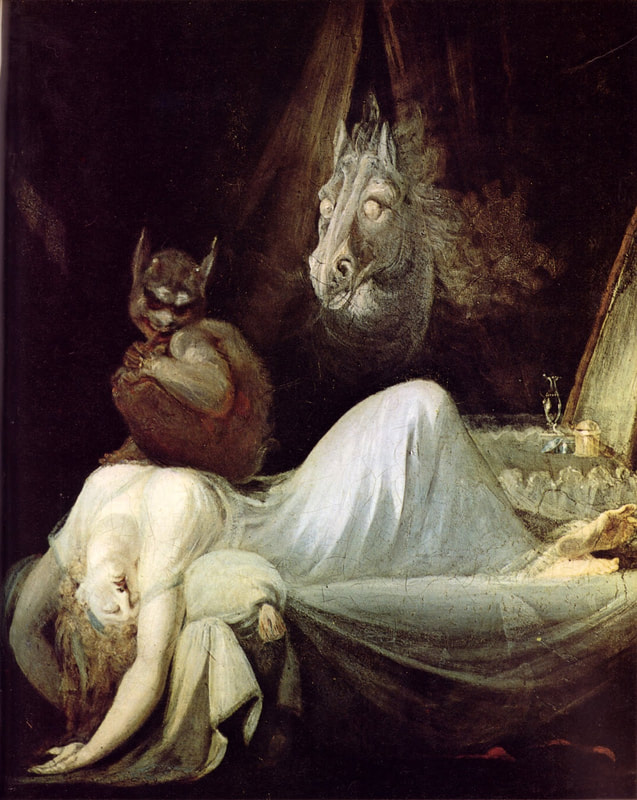 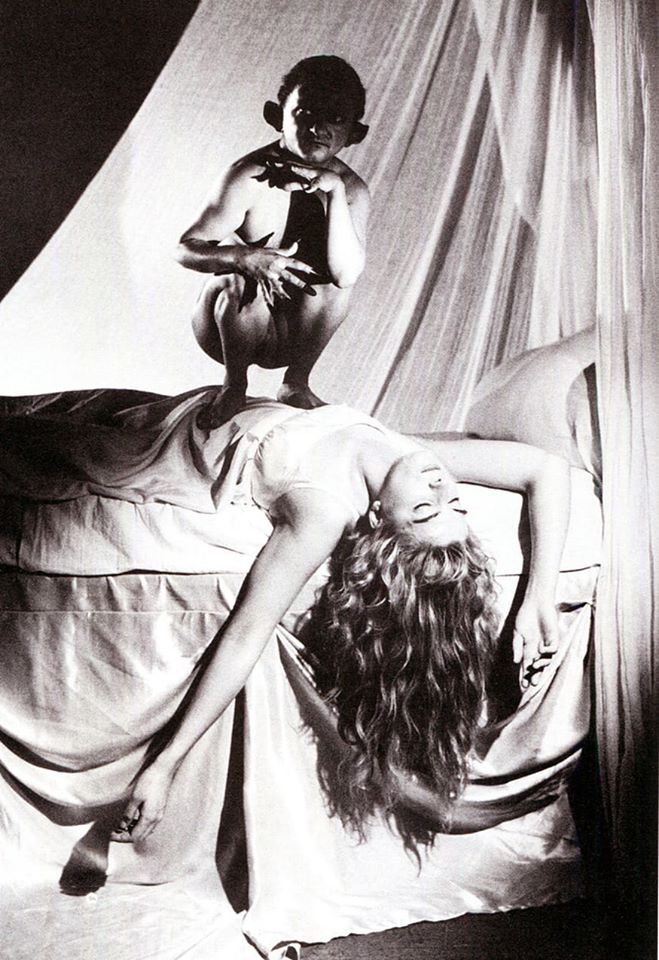