Cover design: Pedro Marques
​
Order a copy of Lies of Tenderness direct from the publisher here
A woman parks her car outside a fateful, familiar motel.

The last giant of Albion finds connection with a soul not long for this world.

A lightning-struck man seeks meaning for his longing and loss.
​
In this new, startlingly wide-ranging collection, Stephen Volk explores hidden truths and secret wishes, deceit and delusion, the paths not taken, and the creatures that make us human.

CONTENTS:
A Letter of Introduction - Priya Sharma
The Holocaust Crasher
The Airport Gorilla
The House That Moved Next Door
Unchain the Beast
Outside of Truth or Consequences
The Little Gift
The Black Cat
Beat the Card Home
Vardøger
A Meeting at Knossos
Sicko
The Naughty Step
Adventurous
The Flickering Light
Bad Language
Agog
Orr
Story Notes & Acknowledgements

"Masterful... (I was) impressed not only by the superlative writing, but also the breadth of subjects and moods. Highly recommended!"  Mick Garris, director/producer The Stand, Bag of Bones, Masters of Horror, Nightmare Cinema

"New work by one of the benchmark voices in strange stories is always great news. One of the most accomplished, ambitious and stunning storytellers around"  Hookland

"The breadth and depth of imagination on display here is matched by a mastery of mood and tone, with many stories displaying a wry restraint that belies the intensity of emotion... Excellent"  Con Connolly, Phantasmagoria Magazine

"A pleasant wave of melancholia runs through this collection including a werewolf tale like no other, the fall out from grief, and the consequences of lying on an inhuman scale. Stephen Volk's handling of character is so real, so raw, my heart was racing a number of times. His casual insertion of LGBTQI+ characters is sublime"  Simon J Ballard, writer for We Belong Dead and Cinema in the 70s magazines

"Feels almost autumnal, curled up in a Dartmoor pub with one of the best books of 2022, Stephen Volk's usual deep humanity permeating these sharply-observed yet nuanced tales of how our lives blend lies, memories, storytelling and self-deceit"  James Downs, writer of Anton Walbrook, Joseph Pike and A Carnal Medium

"The atmospheres here are dark and sinister, but the narrative style is consistently elegant, sensitive and totally captivating... A highly recommended collection by a truly great writer"  Mario Guslandi, Black Gate

"To describe the writer Stephen Volk as a master of contemporary macabre is only to tell the truth – but that’s not the whole story. Rather like his great predecessor Robert Aickman, Volk’s work might be more generally described as being located within the wider realm of the ‘strange’ – in all manifestations of that word. The new collection, Lies of Tenderness (from the enterprising bijou publisher PS Books), is a varied and accomplished volume that demonstrates the range of the writer’s achievement... Volk’s imagination is given free rein in a variety of off-kilter narratives – such as ‘Sicko’, a clever riff on Hitchcock’s Psycho... If you enjoyed (his) work either on screen or the page (as in his innovative Dark Masters Trilogy), you need not hesitate"  Barry Forshaw, Crime Time

"Superb... In addition to being attracted to 'difficult' subjects and people, there's a real sense of anger in many of these stories; a sense of profound dissatisfaction with the brutality of the status quo, and a desire for things to be other, better... Lies of Tenderness is another absolutely outstanding collection from a writer who continues to challenge, to grapple with contentious ideas and subjects, and who in the process produces work with an incredible range of moods, textures and emotions. but which are united by an exceptional level of quality"  Kit Power, Ginger Nuts of Horror

Read the full review at Ginger Nuts of Horror here

"If there's the potential for a story, and Steve Volk sees a way of developing it, then he will - and if that means entering territory and mindsets that are outside the reader (and the writer)'s comfort zones, then so much the better... Another unsettling, thought-provoking and highly-recommended collection. 10/10"  Paul Simpson, Sci-Fi Bulletin 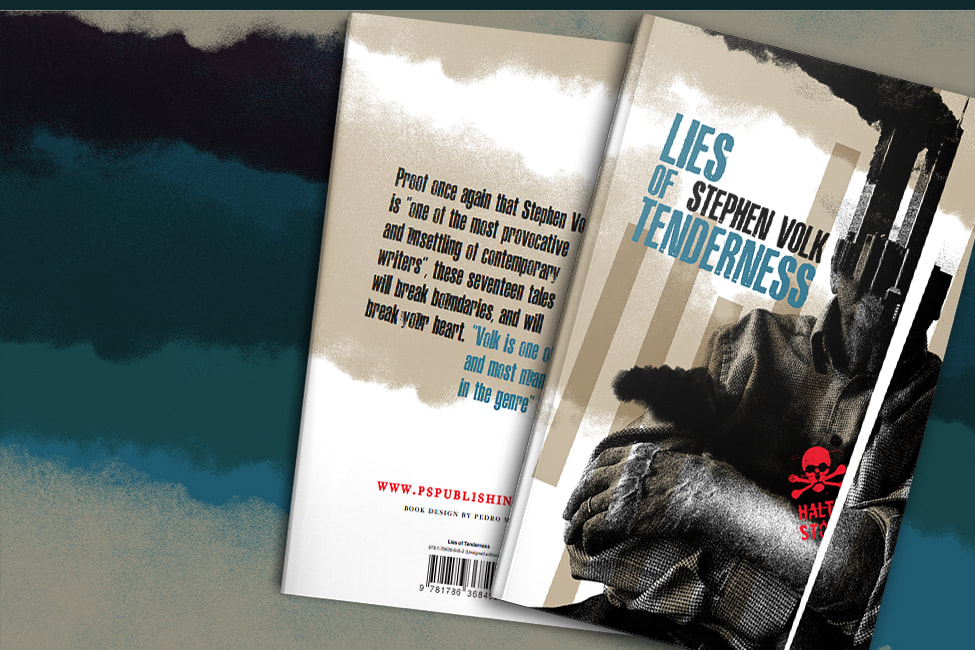 Stephen Volk sits down with Ginger Nuts of Horror's Kit Power to discuss his new collection of stories Lies of Tenderness, writing during the pandemic, and ‘the edge of okay’.